April 30, 2021 marked the completion of the project ROHU-54 “RiskMan- Cooperation on risk prevention and disaster management in the Zerind – Újkígyós cross-border area”.

The project addressed common needs in the field of risk prevention and disaster management, identified on both sides of the border, at the level of the Zerind-Újkígyós area (including fires in the open field, etc.).

The success of the project is based on the integrated cross-border approach, which has brought a number of benefits to the whole area of the project: improved preparedness of intervention teams, increased ability to communicate, reduced response time in emergencies, a better prepared local population in disaster prevention and control, as well as better equipped local emergency response services.

The main activities of the project were:

Due to project ROHU-54 “RiskMan”, residents living on both sides of the border have one more reason to feel safe: 14,474 people in the Zerind area and 13,680 people in the Újkígyós area are now protected from disasters by improved emergency response services.

The completion of the project was marked, on 29.04.2021, by a closure event, followed by a press conference.

ROHU-54 „RiskMan” is the 38th project financed within the Interreg VA Romania-Hungary Programme, through the calls for normal projects, that is being completed. By the middle of this year, respectively by June 30, 2021, 2 more projects will be completed, with a total value of 3,439,739.00 euros, of which 2,910,720.04 euros represent ERDF funding. 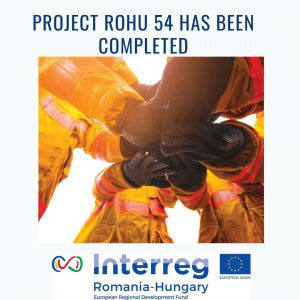