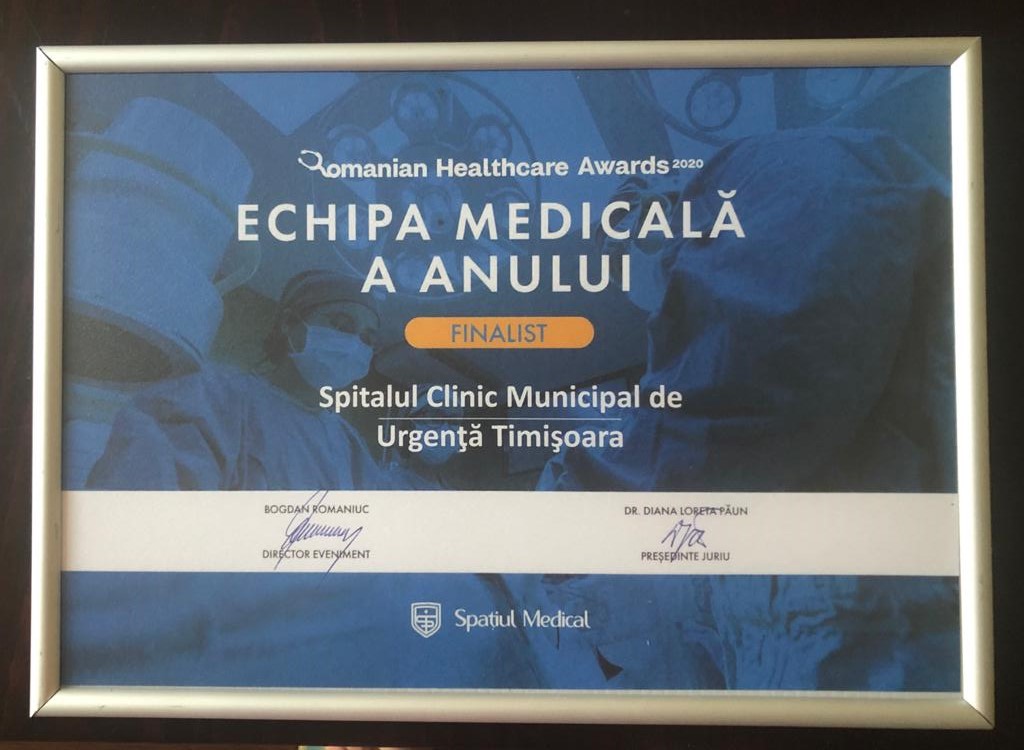 The ROHU-396 Team-Cardio-Prevent squad from the Emergency Municipal Clinical Hospital Timișoara was awarded the Romanian Healthcare Awards Diploma of Excellence and the Medical Team of the Year trophy for the project named ”Cross-border cooperation in the prevention and complex treatment of cardiovascular and peripheral vascular diseases in Békés -Timiș counties”.

The Romanian Healthcare Awards is the first and largest competition with an international jury dedicated to doctors, medical teams and Hospitals in Romania, an event recognizing innovation and excellence in the field of health, which aims to identify and appreciate examples of good practice in the Romanian medical system, individual and team achievements. The award ceremony took place in Bucharest, on September 24, 2020, with the participation of the Ministry of Health. the Romania College of Physicians, and the medical universities of Iași, Cluj-Napoca, Târgu Mureș and Timișoara. There were 15 finalists, 5 for each of the categories Doctor of the Year, Medical Team of the Year and Hospital of the Year, and for each category, a trophy was awarded.

The implementation team of the ROHU-396 Team-Cardio-Prevent project, led by Prof. Dr. Mirela Tomescu Cleopatra - project manager and Dr. Maria-Olimpia Oprea - project medical coordinator, was designated winner after submitting the project in terms of the addressed issues, impact and received feedback, as well as its originality. The main results of the project were presented: six health-care departments Emergency Municipal Clinical Hospital Timișoara modernized by the purchase and installation of an angiograph, one Magnetom Magnetic Resonance system software, three ultrasound systems, four blood pressure monitors and four electrocardiogram monitors, seven medical beds, four electrocardiographs and two portable defibrillators. Also, the hospital has set up a department of interventional cardiology, 40 medical specialists are trained through joint workshops and 3,000 people benefit from the screening program.

The Hungarian partner of the project, Békés County Central Hospital, is purchasing a digital subtraction angiography system for the Invasive Cardiology Department Gyula, as well as an ultrasound diagnostic device for each of the Cardiology outpatient care departments from Békéscsaba and Gyula.

Through the Interreg V-A Romania-Hungary cross-border cooperation Programme, the ROHU-396 Team-Cardio-Prevent project benefits from total funding of 2,707,466.44 euros, out of which 2,301,346.47 euro from the European Regional Development Fund. The project aims at improving healthcare services in the two institutions from Timiș and Békés counties, for the prevention, diagnosis and treatment of cardiovascular and peripheral vascular diseases, for the benefit of the population within the area, through an inclusive and modern approach.